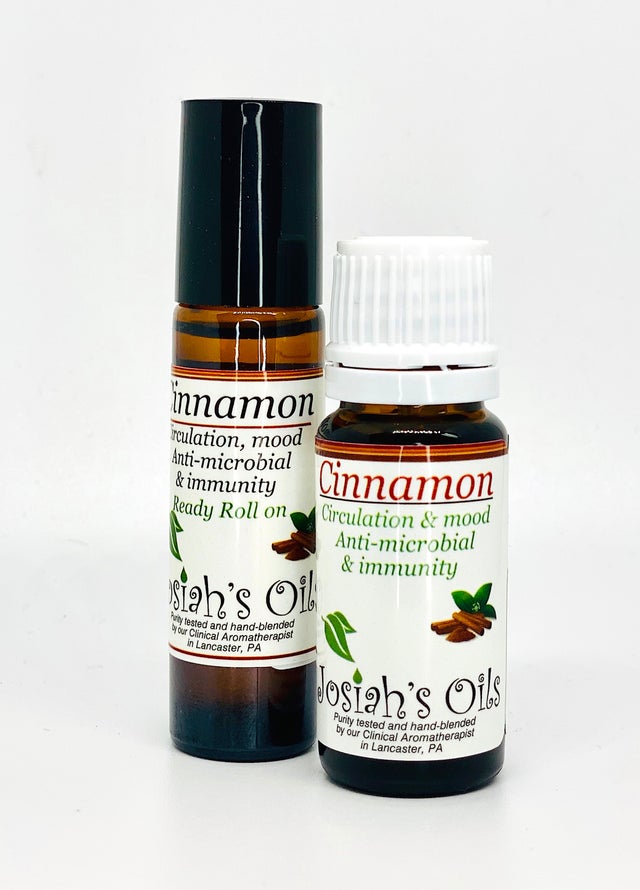 ​Strong Aromatic Scent: Cinnamon Oil has a warm, spicy scent that is somewhere between clove and cinnamon. It is slightly herbaceous with pepper notes.

Common Uses: Cinnamon Bark Essential Oil is highly respected as having antiseptic and antimicrobial properties. It has been found that MANY viruses, bacteria, and fungus cannot live in this oil. It helps treat many respiratory infections including flu, coughs, and colds. Due to its warming nature, Cinnamon can help treat rheumatism, arthritis, and sore muscles. It can also help you slow down neuropathy. In blending, it can enhance the action and activity of other oils.

Cinnamon has strong antibacterial and anti-viral activity. The cinnamaldehyde component of cinnamon is responsible for its anti-microbial activity. It can inhibit the growth of Listeria and Escherichia coli in food products thereby potentiating their shelf life…[Cinnamon] it is said to inhibit protein synthesis which is responsible for is ability to improve survival in mice following infection with influenza A/PR/8 virus.”  https://www.ncbi.nlm.nih.gov/pmc/articles/PMC4466762/#ref26

“Inhalation … of [trans-cinnamaldehyde (CA), one of the principal constituents of essential oil]  significantly increased survival rates on the 8 days to 100% and 70%...in contrast to a survival rate of 20% in the untreated control group.”  https://www.ncbi.nlm.nih.gov/pubmed/17303260/

In addition, true cinnamon is known to improve cognitive function. Cinnamomum zeylanicum also has promise in limiting the Alzheimer induced changes in the brain and improve recognition. https://www.ncbi.nlm.nih.gov/pmc/articles/PMC4466762/

Cautions: Cinnamon Bark Essential Oil can be irritating to the skin and mucous Avoid use topically during pregnancy; always patch test for allergies; USE WITH CAUTION IF ON BLOOD THINNER

*Many companies use Cassia (calling it cinnamon) in their blends.

However, “According to the European Food safe authority, cassia cinnamon has been the cause of exposure to [higher amounts of ] coumarin which is highly hepatotoxic and carcinogenic.” https://www.ncbi.nlm.nih.gov/pmc/articles/PMC4466762/